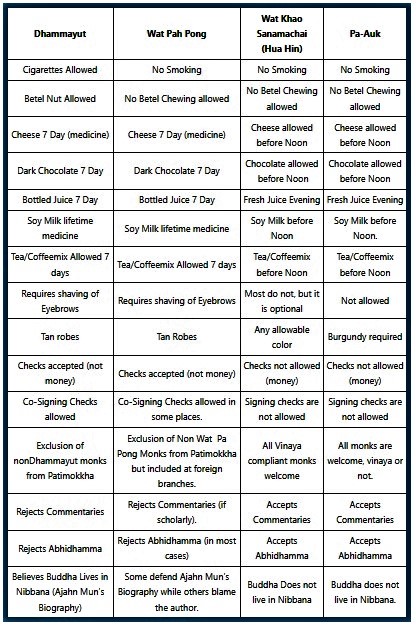 Vinaya: Very strong and rigorous alignment with the textual sources of the pāli-canon in combination with the commentaries (aṭṭhakathā) and sub-commentaries (ṭīkā). The vinaya is well emphazised, understood and taught and therefore present in daily life. A unique place for living and receiving training in authentic vinaya.

Vinaya: Very strong and rigorous alignment with the textual sources of the pāli-canon in combination with the commentaries (aṭṭhakathā) and sub-commentaries (ṭīkā). The vinaya is well emphazised, understood and taught and therefore present in daily life. A unique place for living and receiving training in authentic vinaya.

Vinaya : In some respects not closely aligned to tipiṭaka, commentaries (aṭṭhakthā) and sub-commentaries (ṭīkā). Some monks at least a doubtful attitude towards accepting money but tit is without difficulty possible to maintain strict standards as the structure is not demanding uniformity in all areas. The facilities were donated by laity and not purchased by monks.

Vinaya Observance: Close to Tipiṭaka, Commentary and Sub-Commentary but with cultural deviations.

A guide for those who want to ordain and how to choose a place. This post is not for everyone.

I only recommend places that follow the rules (vinaya-following monasteries). It is the same as “Philosophy Matching” but more serious. If you are told it is “okay” to break the rules, then it can lead to very bad kamma. Most monasteries (about 98% of them) break the rules on money. Most monks who break the rules on money often break the majority of bhikkhu rules The Buddha created for his monks to follow. Breaking the rules is disrespectful to the Original Teacher, The Buddha. It will bring one demerit rather than the great merit that can be earned as a monk. Using money is a serious thing because it is unallowable every second you have money or things bought with the money. Small drops of kamma like this add up quickly like the rain fills the oceans. See this video here.
…
In Sri Lanka there is the Na-Uyana of the “Galduwa” (Cave Dweller’s) tradition. They have a rule that they don’t ordain anyone over 55. Usually it is 30’s and 40’s and 50’s. Na-Uyana has about 180 monks and novices including their pariyatti center down the road.

Na-Uyana Forest Monastery, Sri Lanka: Na-Uyana is a fine monastery with over 5,000 acres. There are 4 or 5 monasteries combined into this monastery with different “feels” to each of them. There is also a learning center 20 minutes down the road. If you want something in between The Thai Forest Tradition and Pa-Auk this might be a good place to choose. The Sri Lankan language is much easier to pick up than the Myanmar language. The culture is quite different from Myanmar and it is less tolerant than Myanmar but more tolerant than Thailand. The food is quite spicy and high in black pepper content but there is special foreigner food available. The monastery has about 180 monks and novices total, but living areas are much more spread out than Pa-Auk. Kutis and the way of living is a little more austere than Pa-Auk but suitable for monks. https://nauyana.org/

Renagiri Lena Forest Monastery (Diddeniya): This ancient cave monastery which is 30 minutes away from Na-Uyana is primarily a learning monastery with very few foreigners, if any at all. However, they should be equipped to ordain foreigners. A good solid foundation will be found at this monastery with really really really good vinaya. The monks at this monastery are very good monks. This monastery is always full and usually two or more sleep together in a cave kuti. This is an ancient cave monastery and the caves are quite as classy as caves can get. The chief abbot is Venerable GnanaSila and speaks very clear English. +94 71 080 8623 (in Sri Lanka) 071 080 8623

International Theravada Institute: This will be a great monastery to build great monks. I think this might be the best place to train and ordain, but you will need to be patient on learning full time meditation. There will be time scheduled for retreats during the training though. There are no foreigners yet, but they are welcoming candidates as soon as it opens. The initial construction was donated by the Sri Lankan President in late 2019 to Venerable Devananda, Venerable Maggavihari, Venerable Ariyananda and another Galduwa official. The monastery is part of the same tradition as Na-Uyana and the government supports the construction right now. It will open in late 2020 or after this pandemic cools down. You can see some of the lectures here. This is a place I recommend if you are into or open to the Commentaries and Abhidhamma but not totally faithful to them. Venerable Devananda wishes anyone to come regardless of their ideas about the Abhidhamma or Commentaries. Venerable Devananda is kind and will give proper instruction and has a gentle way to successfully persuade people to learn and do the right thing. This will be primarily a study and training monastery, but will have 2 hours of meditation required per day. There are traditional requirements that all monks should know within their first five years which are rarely required anymore. They want to bring this training back to life. The abbots are very kind and highly intelligent. They might be some of the most well learned monks in Sri Lanka actually. I might go there some time later on to complete some studies and training.
…

In Myanmar (Burma), you have the choice of Pa-Auk and Pa-Auk. Fortunately, there are quite a few branch monasteries that one can visit. However, only a handful are suitable for foreigners and ordination. A few independent monasteries do exist. Even so, many of these “independent” monasteries have abbots who grew up in Pa-Auk. Varanasi Monastery is one such place. Mahavihara is a great quality independant vinaya monastery with 1600 monks. However, this is not suitable for most foreigners and if meditation is your thing, know that these are a study monasteries.

Pa-Auk Pyin Oo Lwin: This is one of the newest of the Pa-Auk monasteries which is designed for foreigners from the ground up. Venerable Pa-Auk Sayadawgyi lives and teaches at this monastery. It is getting quite large now as well, with 250 monks and a total of 550 residents, which makes it almost equally as big as the main center in its earlier days. The climate is cool, rainy season is light and the food is very acceptable to foreigners. The food is by buffet so you can choose what is suitable for your needs. There are vinaya classes weekly and a dhamma class weekly by the Abhivamsa Meditation Teacher, Sayadaw U Kumarabhivamsa. The meditation schedule is rigorous and attendance is taken in the meditation hall and at interviews. A pathway to ordination can be much quicker than the Thai Tradition, but they still like to watch you for a few months. Medical facilities are on the premises. There is a huge waiting list, and email responses are often lacking. https://paauksociety.org/
…
There are 12 monasteries in Thailand which follow the vinaya very closely to the Commentaries and Abhidhamma. The main center is Wat Khao Sanamchai in Hua Hin which is a learning center. Google knows about the place but there is no website. There is virtually no English support, but maybe one of their monasteries would ordain foreigners. Their monks often come to Pa-Auk in Myanmar for meditation and there is a 4 postures meditation center down the hill from them. Phone: +66 32 536 604

There are 12 monasteries in Thailand which follow the vinaya very closely to the Commentaries and Abhidhamma.

Your link was nice. I have only seen 2 of the 12 monasteries and have addresses for 3. This was nice to see. I re-read my own post. Some parts are quite funny

It is true. One example would be Ajahn boowa sect that taught eternal consciousness and “Arahant can cry”. Even Thai people thought that he was Arahant.

Oh. You should probably have just said Thai forest than. If it is not something that applies to dhammayut as a whole.

Well… when speaking of a vinaya tradition coupled with the Dhammayut, it pretty much implies that of Ajahn Mahaboowa, at least in the English Speaking world. I think there is a consensus on this. Let me know if I am wrong. I can ask a friend on this too.

The Thai Forest tradition is rooted in Ajahn Mun of the Dhammayut. It was forked with Ajahn Chah who Mahanikai. So there are two traditions. Both do not generally accept the commentaries and Abhidhamma although some may claim they accept “some” parts. Dhammayut was intended to be a vinaya tradition. Vinaya monasteries are now a small minority from I have heard.

I think thats true. but officially in Thailand, the government has formally recognized any monk/temple that traces its lineage to Prince Monkut’s reforms as being part of the Dhammayuttika Nikaya. Sure in the english speaking world people would probably just make the assumption you just mentioned but since there is an official designation of certain temples/monks (about 6% of the monastaries/monks in Thailand) as Dhammayut and the rest as Maha Nikaya it might be better to specify so people dont lump in anything officially designated by the Thai gov as Dhammayut to be the group your talking about.

yes… but what are the chances of them following vinaya if they are not in the Thai forest tradition or related to wat khao? I stand on my ground until you can tell me merely 2 monasteries that follow abhidhamma, commentaries and ehem…vinaya that are, not loosely related to the 12 - 14 wat khao monasteries.

A monastery that does not follow vinaya either disrespects the Buddha’s teachings and instructions or has wrong view about what is an obstacle. If they die with offenses racked up, they will be reborn in the hello or animal realm (peta).

Sīla is the most basic foundation for samādhi and pañña. There is no way around this. So I am speaking in the context of suitable monasteries" because another article mentioned is “where to ordain”, which was in the original post of this thread.

However, Wat Khao Sanamchai is technically a Dhammayut ordination hall.

For dhammayut?.. You can check yourself about the average sīla… it is like calling Sitigu Sayadaw speaking about how monks take 227 precepts.

At this point i think i will be content with a proper ordination, “no cutting corners in Sīma”.

As to vinaya i think i might be able to tolerate it if monks want to abandon minor rules as long as it’s not excessive, is properly discussed/made known and, if they don’t mind me attempting to follow the rules & at least sometimes encourage others to follow the rules which they abandon.
I will even try to keep to myself, look away, cover up with leaves & avoid disclosing their misdeeds in as far as it is reasonable as to avoid unnecessary conflict.

As to practice i wouldn’t be surprised if i won’t care about what others are doing as long as it isn’t something extremely weird, isn’t kept secret for no good reason and can be discussed in good faith.

It sounds like you don’t care much about classical theravāda

Sīla is the most basic foundation for samādhi and pañña. There is no way around this.

I had arranged for someone to ordain at wat khao. He was told by the abbot it would be a dhammayut ordination. (I thought dhammayut was better than mahanikaya because it is myanmar based, but the person wanted mahanikaya)
Because of that, i changed the place to 10,000 pillars place. Both are “affiliated” and both don’t care about nikaya. It is a technical matter and probably just a matter of the ordination certificate.