Tipitaka Pali Projector (TPP) is a very useful tool for reading pali. It is fully offline and has a useful dictionary UPED (Ultimate Pali English Dictionary) which has 168,000 words (15,000 more words will be added soon). The UPED is from the Myanmar Abhidhan dictionary which is based on commentary explanations. It is translated by Google, but 47,000 words have already been human edited. TPP is very useful for reading the commentaries. However, one can only open on screen at a time.

It is also useful for searching the suttas in English. Plans to add searchable English texts such as: Buddhist Legends, JatakaA and Questions of King Malinda are in the works.

If you want to help, you can join the github group here:
This application will be replaced by TIpitaka Pali Reader (TPR) which is already in the iOS and Android Stores. It is written in Flutter and will eventually have many of the same features and be more modern.

You will need to watch videos in order to learn how to use it here: https://www.youtube.com/channel/UCMKjBJT7vMjyWt8RU4lpiDg

I tried it out for the first time today and find it is a much more efficient way of searching the Tipitaka and Commentaries than what I was using!

I usually use both Firefox and the osApp together. There is a video to explain why. Alt + Tab is easy to switch between mula and commy. Video here: Using Mula and Aṭṭhakathā at the same time. (hack) - YouTube

Bhante and Dear All,

Have you used this app which we have been using in Sri Lanka for some years.
(I don’t know if you have been already using more advanced apps.)

Yes, I’m very familiar with the app and Janaka, developer too. The Sri Lankans seem to love the app, but I find TPP more suitable for my own tastes, which would make sense, since Tipitaka.app was made by a Sri Lankan, and TPP was project managed by myself. We use some code from Janaka for the pali font conversion. He has been very kind.

Tipitaka Pali Reader will be really nice, when we get it finished. You will see in due time. Flutter is the new up and coming programming language and it is really beautiful.

The key difference is that we have the UPED dictionary, English searching and pali/english suttas (line by line).

TPP is geared for English speaking learners of Pali like myself.

It might be good to have a Wikpedia page… “Comparison of Pali Readers” in the same style they do with other apps or platforms.

I installed this app and used it for quite some time. I think it is very useful. I just hope there will be update for this app to increase translation for Pāli words.

A recent update has been made. 1.2.1 Hopefully you have that.
Also, if you know git, you can use the Firefox edition to get pre-release updates.
The idea is you just do a fetch or pull command, and it only needs to download the code changes.

1.4.0 is released on the Microsoft App Store and also the Ubuntu Snap Store. MacOS is coming soon.

You can check the release repo for the dmg file. It should be there shortly… the macOS official appstore version will hopefully come in a week. 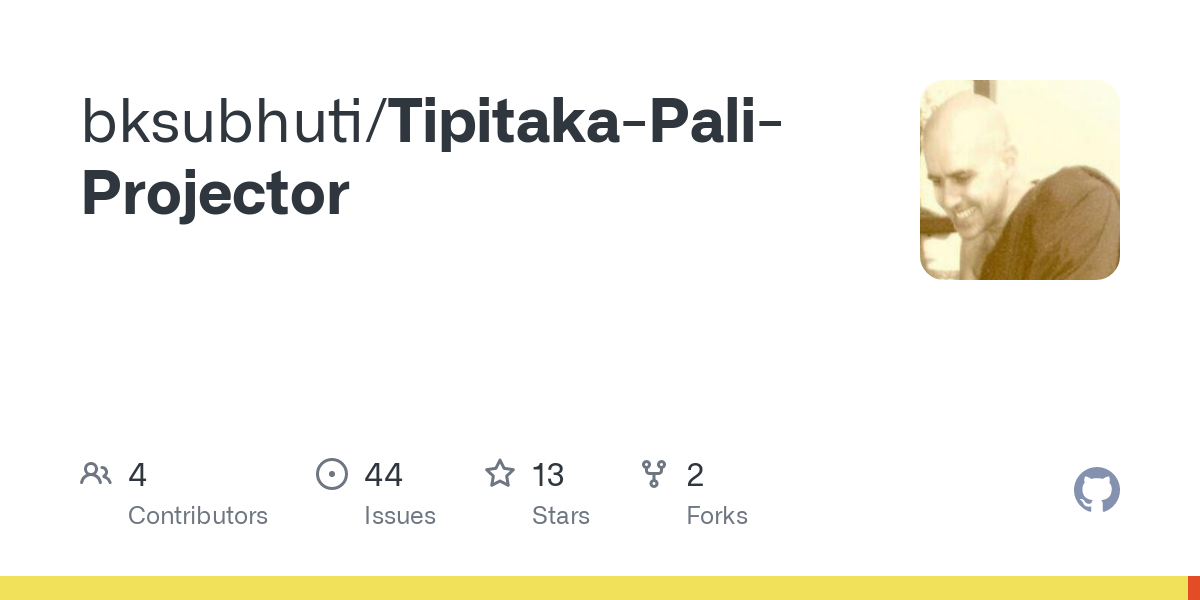 Contribute to bksubhuti/Tipitaka-Pali-Projector development by creating an account on GitHub.

What will come next?

Buddhist Legends and Jataka will be included for multiple word searching in English.
When this is complete (in one or two weeks), you will be able to search all vinaya, suttas, dhpA, jaA in English with multiple keywords all at the same time. It is coming very soon and already here for vinaya and sutta pitakas.

TPP will be a standard tool for those who do not know pāḷi. I will try to encourage acceptance of the Abhidhamma and commentaries, to be either be on the home screen or flash onscreen during startup.