Recommendations For Setting Up a Shrine at Home as a Layperson?

I have re-arranged my room and intend to use a corner for a dedicated meditation spot and a shrine/altar I can make offerings to. My intention is to have a concrete manifestation of my practice at home I anchor my habits to. I also wish to gain inspiration from taking care of a Buddha statue, seeing it often, and making symbolic offerings to the Buddha.

Is this a good idea? I’m making this up on my own since I don’t come from a culture where Dhamma is practiced. I’m suspicious I may do something wrong and would like to observe tradition if possible. But I feel it would be very helpful to a physical presence of my religious faith like this I can go to in my home and create rituals around to order my day. 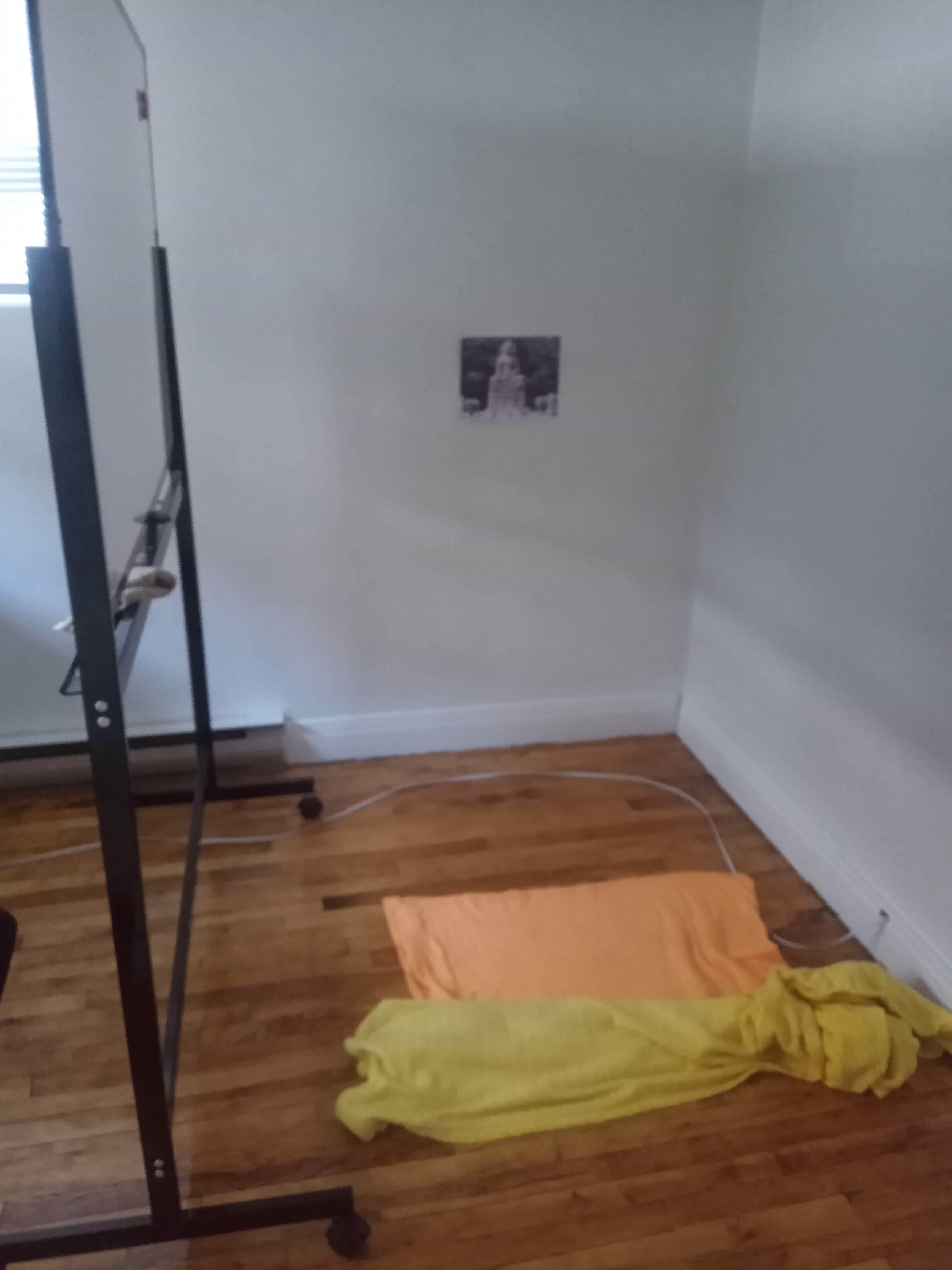 I’m thinking of getting a wooden platform, a Buddha statue, and a room seperator/privacy wall to close off the section for the rest of the room, but that still allows me to see the Buddha when I come in.

I’ve heard somewhere that in Theravada countries lay person shrine rooms have the Buddha statue place at the highest point in the room. I considered doing that, but it make it difficult to look up at the Buddha statue when I sit on the floor.

Would love to hear what people think and how I can create an altar/shrine corner in an appropriate, respectful way that will be helpful to my practice.

Yes, it is totally recommended to make a special space. Many or most Buddhist houses in Myanmar have either a separate room dedicated for Buddha or special ledge similar to a “green house window”, but without the glass, where the Buddha will sit. “Highest” means highest seat. You don’t need to put him up on the ceiling. Until you get a proper separator, you can put a bed sheet over the whiteboard. A monk would use a robe if doing what you are doing. A Theravada statue is very recommended.

There are many features that make the Buddha a Buddha besides the iconic drooping earlobes. Some Buddhas are just not right. 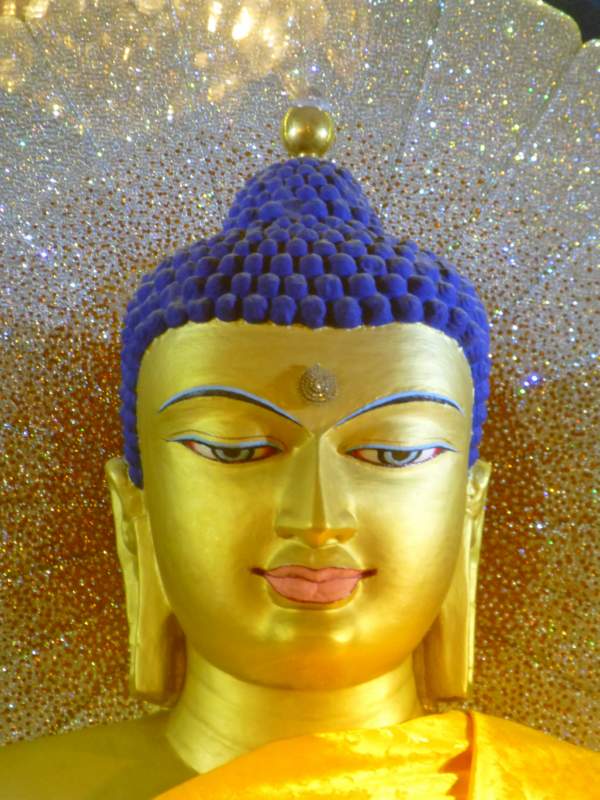 PhotoDharma.net has thousands of Buddha and other related pictures all with the Creative Commons Attribution Share-Alike copyright.

I used a bookshelf to support a heavy Buddha image. It is attached to the wall with two wall-plugs to stop it tipping. 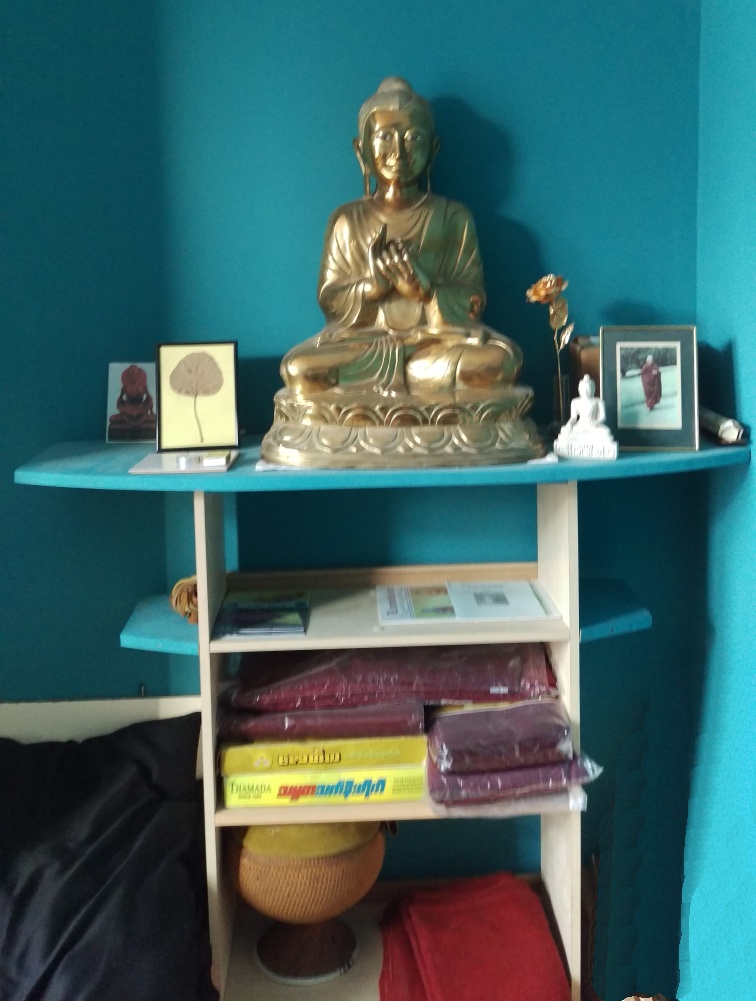 The Buddha did not have long hair. Make sure you get a Buddha with snail-like hair. Somehow many Buddhas are now made with long hair.

Until you get a proper separator, you can put a bed sheet over the whiteboard.

Thanks for the idea! I’ve been using a sheet on the whiteboard to seperate the space.

And thank you for reminding me of that article, I would’ve forgotten and wouldn’t know what attributes to look for in a Buddha statue.

Thanks! I like the versatility & simplicity of using a bookshelf.

Sharing some Buddha statue pictures that considered as proper design according to Theravāda tradition. 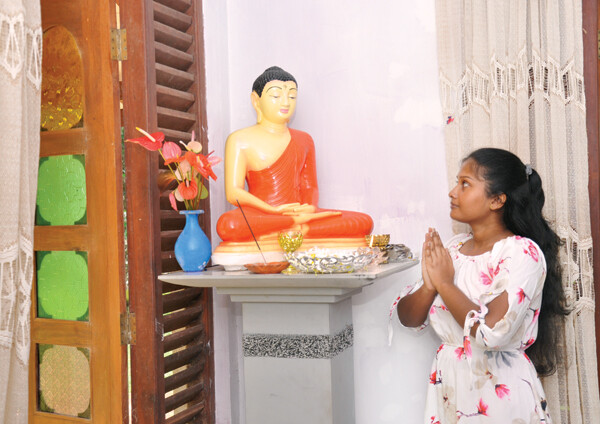 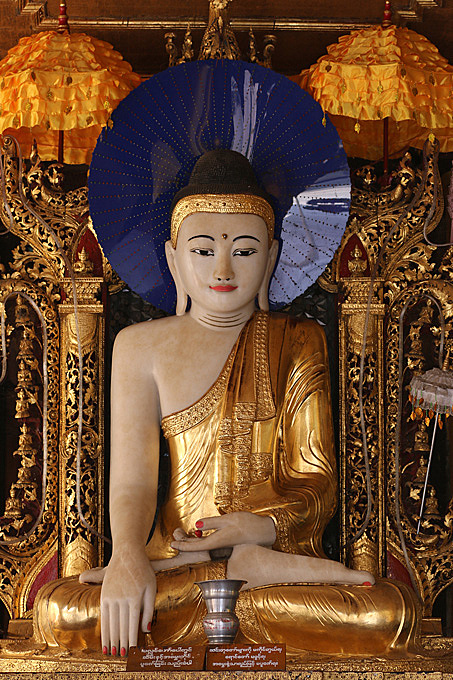