Pariyatti as the Root of the Sāsanā

Pariyatti as the Root of the Sāsanā

And in that place [Maṇḍalārāma Monastery in Kallagāma] there arose a discussion among the elders as to whether the root of the Dispensation consisted in practice (paṭipatti) or in study of the Teaching (pariyatti). Those elders who were wearers of rag-robes said, “practice is the root,” and those elders who were teachers of Dhamma said, “study is the root.”

Then some elders said, “we cannot decide between your two opinions merely on the basis of your assertions. Support them by quoting a saying spoken by the Conqueror.”

“It will be no trouble to quote a saying,” replied both sides. Then the elders who were wearers of rag-robes quoted these passages:

“Subhadda, if bhikkhus in this very Dispensation were to live rightly, the world would not be empty of arahants.”

After listening to these sayings, the elders who were teachers of Dhamma then quoted this saying as proof of their own claim:

When this saying was quoted, the elders who were wearers of rag-robes became silent and the speech of the teachers of Dhamma prevailed.

Then some elders said, “we cannot decide between your two opinions merely on the basis of your assertions. Support them by quoting a saying spoken by the Conqueror.”

Interestingly, these elders don’t seem like having any strict opinion on the matter.
Are they taking the middle path?

Neither among a hundred bulls, nor among a thousand, will even a single bull ensure the continuance of his line in the absence of a cow.

Here the necessity of a cow is emphasized, yet the study-monk has equated (in simile) to a cow and practice-monk has equated to a bull. Does that simile hint about a weakness in study-monk although he is a necessary one? Or is it just a simile to convey the meaning?

Any systematic way for laypeople to do Pariyatti?

I just memorise the scriptures that I felt interested

So far I memorised these scriptures and they didn’t slip away from my memory:

Any systematic way for laypeople to do Pariyatti?

I just memorise the scriptures that I felt interested

I think the old way for was new monks to study the Abhidhammatha-sangaha . That gives the basics.

Anyway pariyatti and patipatti go together.
When listening to or reading Dhamma there is also considering it.

Assuming that the study/considering is with maha-kusala cittas associated with wisdom (i.e real pariyatti); then it is of the same type as the citta that arises when there is patipatti. The difference is that object of patipatti is taken directly as enumerated in the satipatthana sutta.

What I have seen and read is about traditional monk’s way of study. And I guess the lay people’s way is also not largely differs from this.

Generally monks study Suttas or Vinaya or Abhidhamma starting from the beginning of each,
while using Visudhimagga, Matikatthakatha(or any brief summary book of whole Vinaya) and Abhidhammatthasangaha for reference and guidance, respectively.

Some monks start from Vinaya.(Because it is the beginning and protection of monk-life )

Some monks start from Nettippakarana or Suttas. (Because they are faith developing and encouraging for practice).

Most of the monks are needed to memorize(at least parts of) Paritta book, Dhammapada, a Samanera advice-book and Pali beforehand. (Because they are considered to be prerequisites)

And some monks study switching between each other Pitakas while keeping the mentioned 3 guidance books as reference.

Nevertheless, apparently, most of the monks have a preference out of the three pitakas (I don’t know whether this is good or not).

Most of the traditional lay people (only if they like studying dhamma), formally start from studying Abhidhamma basics.

Thanks for the info.

In that case, I prefer to use Majjhima Nikaya for Sutta study, Visuddhimagga as commentary study.

It would not be a bad idea to start memorizing some of the abhidhammatthasaṅgaha
I would start with the 8 kusala citta. They are easy to memorize.
Then apply them to the 6 sense doors.

While I think most people prefer the majjhimanikāya over all nikāya, I would have to say that saṃyuttanikāya is more geared towards systematic practice, especially, nidānavagga, khandhavagga and saḷāyatanavagga and other vaggas.

Furthermore, these are more conclusive for reading and learning pāḷi. Why? Because the majority of these are based on technical terms which repeat again and again. The variations are small and therefore the new vocabulary is not so much per sutta.

I’m personally working through the saḷāyatanavagga now right now. I have read the 4 nikāya and believe the sn is most profound. I think others who are well read will feel the same.

Memorizing suttas or gathas are a good idea. pāḷi chanting is very common in monastic environments.

All that said, all 4 nikāya have different qualities. I have not read all of the khuddakanikāya though. Perhaps I am biased because my current “straight through” reading is now on the saṃyuttanikāya. (I think i may have jumped ahead of Devatāsaṃyutta).

A German monk had 3 volumes of Buddhist Legends as private property and I asked him to donate to the library. Eventually he did, and he made me promise to read every story. A very wonderful agreement.

I’ve also read most of the JaA too.
Definitely try to stay close pāḷi or translated pāḷi into English.

A German monk had 3 volumes of Buddhist Legends as private property and I asked him to donate to the library. Eventually he did, and he made me promise to read every story. A very wonderful agreement.

I’ve also read most of the JaA too.

here is the last volume by Burlingame - his translation of the Dhammapada Commentary. 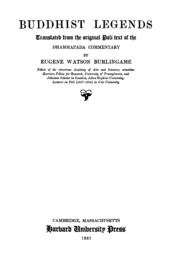 The best edited copy of Buddhist Legends is here:

I prefer this The Dhammapada: Verses and Stories

I think both pariyatti and patipatti have their own specialties.
Pariyatti: Root
Patipatti: Trunk
Pativedha: Fruit

Without the root there is not tree or fruit. Pariyatti/paratoghosa is the root or base of the sasana. Pariyatti is distinct in this aspect.

Without the trunk no fruit can be obtained, even though there is the root. In order to obtain fruits there should be a trunk grown.

Patipatti-less pariyatti merely secure the roots.
Pariyatti-less patipatti either becomes a wastage or leads towards views.