Painter of Painters, the Maestro Incomparable

The Eternal Artist who lives in Kelani Temple murals

Among the many great artists whom we posthumously admire, Solias Mendis is one who is at the forefront. In fact, he dedicated his whole life to Buddhist mural art. However, neither any State art institute nor any art critic honoured or valued his art...

He looked a simple villager from Madampe, like just another Appuhamy or Heen Banda with traditional hair knot (Konde). When Dr. Marianze, the world famous Art Conservator sent to Ceylon by UNESCO (to help preserve the Sigiri Frescoes that had been damaged by vandals in 1968) was introduced to Walimuni Solias Mendis by Dr. Raja de Silva, (our one time Archaeological Commissioner) Mendis and Dr. Marianze just gazed at each other in wonderment. There was stoic silence and the two, the simple villager and the world renowned Art Conservator smiled. No doubt that moment recorded a rare greeting.

It was a communication gap that separated the two, because Solias Mendis knew no English nor Italian. He spoke only an age old Aryan dialect Sinhala. Dr. Marianze was amazed at the simplicity the maestro displayed, but he knew they both had one thing in common - Temple Murals. And talking of Temple Murals, undoubtedly Solias Mendis was acknowledged to be in modern times the “ Painter of Painters, the maestro incomparable.” It is said that, he was a genius inspired by the Hindu Goddess Saraswathie, the venerated icon of Art. 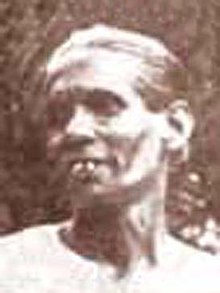 Walimuni Solias Mendis (June 17, 1897 – September 1, 1975) was a renowned Sri Lankan artist primarily known for his Buddhist temple paintings, accomplished in a neo-classical style. A native of Mahawewa, Madampe in Sri Lanka, second of seven boys in the family, Mendis was intended by his parents to become an Ayurveda Physician, but he was drawn to art. In his early years, he worked and trained alongside his uncle Memonis Silva, himself a master painter. Once accomplished himself, he began pai... 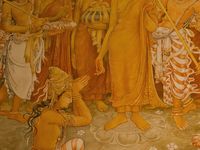 Fascinating, thanks for this!