I know, I know, it's not really compatible with Theravada, and that's why I refused to read it for many years, but I just started Dharma Bums, and, I'm somewhat impressed. Anyone else?

This book was recommended to me many times over the past twenty years. I was always annoyed, knowing it’s not about Theravada, which is to say, original Buddhism, but rather is the beat generation perversion of Buddhism. So, I would explain that these idiots are why Buddhism got its association with drugs, alcohol, and hippie nonsense, and that’s not Buddhism, and it’s frustrating when I tell people I’m Buddhist and they assume it’s hippie bullsh*t because of these morons, and so I’ve zero interest in the work.

Nonetheless, I decided to read On the Road, because it has nothing to do with Buddhism, and is on many top 100 best novels lists. Turns out, it’s good. I can’t even explain why, which is even more impressive; it is ineffably a good novel. I actually thought it was blathering drivel for the first few chapters, and then, out of nowhere, found it entertaining. So, since it was so good, I finally broke down and started reading Dharma Bums, which is kind of a sequel, and it’s really good. I have to sift through some of the unsavory bits, as with On the Road, but, those aside, there’s a lot of pleasant story.

On The Road was pretty much a true book with the names changed. Many of the characters in the book were not happy to be revealed.

I have not read The Dharma Bums book, but since it is probably non-fiction maybe I’ll read it.

Zen and the Art of Motorcycle Maintenance was a terrible book. I don’t recommend it. There is no Buddhism in it, but it is mostly a nonFiction novel. I can totally see why it was difficult to publish, but I cannot see why it made it as a “classic”. 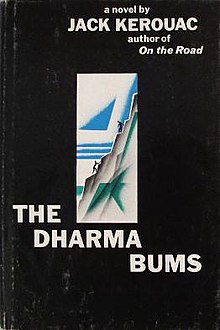 The Dharma Bums is a 1958 novel by Beat Generation author Jack Kerouac. The basis for the novel's semi-fictional accounts are events occurring years after the events of On the Road. The main characters are the narrator Ray Smith, based on Kerouac, and Japhy Ryder, based on the poet and essayist Gary Snyder, who was instrumental in Kerouac's introduction to Buddhism in the mid-1950s. The book concerns duality in Kerouac's life and ideals, examining the relationship of the outdoors, mountaineerin...

Thanks for sharing your thoughts, Venerable. Indeed, I had never heard the term “roman a clef” (novel with a key, fictional facade over real story) until I read up on On the Road a couple weeks ago. I share your sentiment about Zen and the Art of Motorcycle Maintenance, though I’ve never read it. Many people have described it to me, and it sounds like the title is a misnomer, and the author seems to agree:

Pirsig explains that, despite its title, “it should in no way be associated with that great body of factual information relating to orthodox Zen Buddhist practice. It’s not very factual on motorcycles, either.”
-Wikipedia

Dharma Bums is about Mahayana Buddhism, the author talks about it a lot, and uses a lot of Buddhist terminology, and discusses meditation with friends. It has some cross over with original Buddhism, of course, as both traditions meditate, appreciate seclusion in nature, mindfulness, use a lot of the same terms (though in different ways, nonetheless they make more sense than they would to a non Buddhist), and so on.

As a disclaimer: It randomly flips to hippy nonsense, and some unsavory things in that vein that I found hard to read, and some may find obscene, or offensive, and certainly are amoral from a Buddhist perspective.

And then back and forth. So it’s a bumpy ride, but I’m finding it worth it, so far. Particularly, I enjoy the nature descriptions.

This started because I’m looking at 100 best novels lists and reading ones that sound good. Coolest thing is, since they’re mostly very old, and considered classics, they’re then available at the library for free lol!