Has the Visuddhimagga been in use, and its techniques been practiced by Theravadins starting with its composition, continuously, until today?

I’ve seen some claims that ancient Theravada was nothing like today, and that what we have today has only been around for a couple centuries. My take is, unless the Visuddhimagga was not used for a very long time, and only started to be used in the past couple centuries, that sounds like nonsense, because the Visuddhimagga is 1500 years old, and still used today. Thus, unless it was strictly not used for a thousand years or so, there is a common thread, that is uniquely Theravada, tying ancient and modern Theravada together, which easily defeats such a claim. But I’m no expert, and can’t find any information on such a specific question. Can anyone clarify?

Visuddhimagga is a book compiled by Ven. Buddhaghosa Thera on the request by Mahavihara Theras at Sri Lanka. It is actually more like a resume submitted to Mahavihara.

I heard this claim by one monk. I will ask him why he says that and try to report back.

Visuddhimagga was not used for a very long time, and only started to be used in the past couple centuries

Indeed, it was not used for a very long time. By the 18th century, Sri Lankan Sangha went into such a decline that Upasampada and meditation practice had to be imported from Ayutthaya: 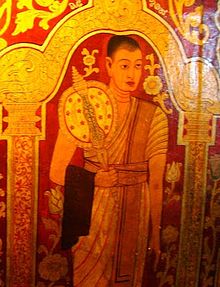 Weliwita Asaranasarana Sri Saranankara Sangharaja Thero (19 June 1698 – 18 July 1778) or popularly Weliwita Sri Saranankara Thero was a Buddhist monk, who was the last Sangharaja of Sri Lanka. He was the pioneer in the revival in Sri Lanka of Buddhism in Sri Lanka, after the decline of the religion in the 17th and 18th centuries. Saranankara Thero was bestowed with the a title by king Kirthi Sri Rajasinghe in 1753, the same year he received the Upasampada (higher ordination of Buddhist m Welivita...

Meditative practice also died out in Burma, and had to be reconstructed from textual sources:

Medawi (Pali: Medhāvī; 1728–1816) was a Burmese Theravada Buddhist monk credited with being the first author of extant modern vipassanā manuals and thus may have been the first practitioner in the modern vipassana movement. Medawi's first manual dates from 1754. Medawi was highly critical of the Burmese attitude at the time, which did not see meditation as important and did not believe that enlightenment was possible at the time due to the decline of the Buddha's teachings. Most believed that th...

So in the past couple centuries the Visuddhimagga became one of the key sources for the reconstruction of meditative practice.

Thanks! So, how long was it used for after Venerable Buddhaghosa wrote it around 500 AD before it declined?

I asked the monk. He mentioned that the terms Kālapa was new and referenced the Abhidhammatthasaṅghaha as being new and what he was talking about as “only a few hundred years old”.

Some terms are indeed considered new just because they were not mentioned in Suttanta:

But that doesn’t mean wrong.

Rupa (Matter) by Nalini Galmangoda Diploma in Theravada Buddhism, YMBA. The Highest gift all gifts is the gift of Dhamma. - PDF Free Download (Scroll down the page)

Don’t know whether the term is new or old. If the term can be found in other Indian languages, then it must not be new. Kalapa can be seen by everyone nonetheless.

Cultures are always changing. India itself is no longer what it was 2500 years ago. We are Buddhists but we don’t live like ancient Indians. Whether Indian or non-Indian, a sotapanna is free of attavada.

Theravāda is a major branch of Buddhism having the the Pali canon (tipitaka) as their canonical literature, which includes the vinaya-pitaka (monastic...

Thank you, Venerable. So, has the Visuddhimagga been in use continually since its writing in 500 AD until today? Or was there a gap?

Visuddhimagga was not used for a very long time, and only started to be used in the past couple centuries

Indeed, it was not used for a very long time. By the 18th century, Sri Lankan Sangha went into such a decline that Upasampada and meditation practice had to be imported from Ayutthaya:

I think that the vsm is not new and there have been cycles of “what is popular” The publish date is the publish date. To think that the major root commentary is new, is guessing what monks have studied. Mainstream Buddhism is different from the sincere practitioner form of Buddhism that follows vinaya. Without the internet and communication or proper record keeping of historical facts, it is really difficult to guess what was practiced and studied. We are very grateful that the texts have been saved.

Buddhism has traveled to Myanmar a few times, but only after it was written down did it stick. We must be grateful for the elders who broke the oral tradition to write it down.

Personally, I am grateful to Venerable Buddhaghosa Thera. With his explanation of Dhamma summarised in Visuddhimagga, everything made systematically and could be followed with great confidence.

So far, I don’t see any serious solid refutation against Visuddhimagga from the modern Suttavadins other than baseless accusations against Venerable Buddhaghosa Thera.

Myanmar has great reverence and gratitude for Sri Lanka Theravada for writing it down and also where the vsm was compiled.

Same here. The Visuddhimagga has brought me peace in so many stressful times. It has also advanced my practice. It is an indispensable work.