As Theravādins, we have a wealth of explanations at our disposal, dozens and dozens of books, millennia of tradition, I rather go with that in most cases

… the truth that EBT philosophy doesn’t have any stable base but an evolving collection of observations.

As a response to the above post on another forum,
I found a nice post from a venerable.

I agree. The confusion resulting from that, I observed, can be significant, with the wildest interpretations. The following is mostly based upon personal experience. Some doubt almost anything, some suggest to just regard the Dīghanikāya as authoritative, some even only the Aṭṭhakavagga . In the end, I believe, the modern-day Suttantikas comprise simply another sect which holds to a certain interpretation of what is Buddhavacana and how to understand it. But they don’t see it that way of course; they think they are quite right and in a special position of knowing what the Buddha actually said. They say the same about us of course … And so the quarrel continues probably until the end of the sāsana .

We are lucky to see the value in a tradition that has lasted in its present form possibly since the time of the Buddha himself and his aggasāvakas , containing all these deep insights by the great Theras of old into the teachings of the Buddha that are contained in the commentaries. Hence "Theravāda ", the doctrine of the elders. Today it is the interpretation of this scholar or that, and if it doesn’t appeal, well, just make up your own interpretation that you like and makes sense to you (sometimes only you). As Theravādins, we have a wealth of explanations at our disposal, dozens and dozens of books, millennia of tradition, I rather go with that in most cases.

But today, we often find the following scenario: This vinaya rule is offensive and misogynistic, well, let’s drop it (well, just let’s get rid of the whole Word Commentary, not even knowing if it is from the Buddha or Upāli). That discourse tastes too much like Abhidhamma , well, it’s probably late. Well, we, as Theravādins, don’t do such things; we leave things as they are, even if it costs something at times. This is one of our greatest strengths and a hallmark of ours. As far as I am concerned, I better go with that and with the Thera’s of old rather than this confused state of affairs nowadays, often breeding disrespect or even outright animosity for the ancient communities (again speaking from personal experience), even going so far as calling them power hungry and/or misogynistic. Saṅghānussati looks different to me … How inclusive is that?

In any case, we also need to grant them that they still can attain to magga-phala even when just following the Dīghanikāya without commentary as much as they need to grant us that we are also able to attain just the same following the commentaries and the Abhidhamma. The Theravāda , we must remember, already stood the test of time, having surely produced plenty of arahants along the way. Everyone needs to decide for him- or herself …

This is a good writing. Love it.

You should invite this monk to join our group. He sounds tired of the other groups, just like myself.

This group is not really to convince people. It is to rejoice in the stuff we all agree with. One of my friends has a Sanskrit degree, yet went through the program at ITBMU from beginner-diploma all the way to MA. I asked him, why ? He said something like

It does not matter. We are involved with the dhamma 6 hours per day. It is all wholesome and useful even if we know the material.

As for the comment about EBT and Suttanta-abhidhamma-rejectors…
It is funny… I feel sorry for them. In a nutshell, they all dislike each other and think the other is wrong but they themselves know the real way. There are different EBT groups. There are different Suttanta groups. I have always said, to several of these monks… If I may quote myself.

If you like only one sutta, perhaps The Anattalakkhana (or Satipatthana Sutta — if they believe it is real) and want to teach that memorize and follow only that single sutta. That is fine. Why do you have to speak about what you don’t like and have doubts about?

The commentaries are very rich. I’m getting better at reading pāḷi and TPP with this Ultimate Dictionary helps me so much. I am finding a whole new world opening up for me. I told this today to one friend of mine who is a western scholar monk who has done many many English translations. He replied…

From what I have seen, the biggest haters have never even read the comm.
They simply hate it as a matter of lifestyle.

He has declined to join our group and does not participate in online groups.

The same could be said about the Abhidhamma.
It is a “crying shame” that people like Mrs Rhys Davids and monks like Bhikkhu Bodhi are lead translators of the Abhidhamma and have expressed opinions of doubt. She thinks she knows more than Ven Buddhaghosa. I should put that in the joke section.

Surely the same is true for Abhidhamma. I’m just starting to read the Dhammasaṅgaṇī now after 21 years as a monk. What more could be said about the haters? The Aṭṭhasālinī (pts expositor in public domain) is very very rich with meditation information too. If this is true for me… than surely it is true for others. However, I must say, the dhammasaṅgaṇī is quite difficult to grasp without a base. And then we get into the “sub sub commentaries” like the Abhidhammatthasaṅgaha. What a work of genius! But “sub-sub-commentary” is a derogatory word in their worlds.
Ironically, there are many sutta references listed in these texts.

Ironically, there is virtually no information about meditation without the commentary and without the abhidhamma commentary (the thing that Westerners love). If John Lennon knew all of this, he would be singing:

“All we are saying, is give these a chance.”

I better go with that and with the Thera’s of old rather than this confused state of affairs nowadays,

Hello Bhante Subhuti, yes I invited the user A.Bhikkhu to join our group too.

What you said is absolutely correct. Quite unfortunate for those people who reject Abhidhamma without study them, a big opportunity missed.

This was said in Atthakatha:

"Abhidhamma-men, having come to knowledge of subtle points, having increased their vision, can achieve a supermundane state”. Non-abhidhamma-men get muddled between ‘own doctrine’ (sakavada) and ‘other doctrine’ (paravada)”.
A. i., 23. MA. ii. 256

And this is exactly what happened in Dhammawheel forum.

The commentaries are very rich. I’m getting better at reading pāḷi … I am finding a whole new world opening up for me.

I remember I wrote somewhere on another forum that Late Venerable Nyanarama had said something like below (may be referring to the own disciple Bhikkhu Nanananda’s critisism).

“If the criticizers of Venerable Buddhaghosa had at least one portion out of hundred wisdom of him, they would never do it.”

It is a “crying shame” that people like Mrs Rhys Davids and monks like Bhikkhu Bodhi are lead translators of the Abhidhamma and have expressed opinions of doubt.

While it is unfortunate that ven. Bodhi has doubts on Abhidhamma, his translations are first rate generally and when he does diverge from the Commentaries he usually explains that that is his opinion . It means the reader can judge for themselves. Overall his body of work is astounding.

I would love him to add more along the lines of his earlier translations of individual suttas where he gave the Commentary and tikas alongside.

But today, we often find the following scenario: This vinaya rule is offensive and misogynistic, well, let’s drop it (well, just let’s get rid of the whole Word Commentary, not even knowing if it is from the Buddha or Upāli).

Perceptions are personal, not universal. In this case, someone perceives something as negative and unable to perceive the way it is positive. A human behaviour very easy to blame than praise.
I found two stories helpful.
Verse 227
Verse 051

While it is unfortunate that ven. Bodhi has doubts on Abhidhamma…

On the bright side, when he translated the Abhidhammattha Sangaha, he didn’t lean heavily on his opinion, and generally presented the Abhidhamma teachings as fact, and supported by the suttas, which I really appreciated. It would be strange to dedicate the time and effort to translate a work, only to present it as something you don’t agree with, but translators do this, all the time (I just read a translation of Epicurus and the translator criticizes the work, and seems to see it as flawed, for example). Thankfully Venerable Bodhi, with this work, isn’t one of them.

But today, we often find the following scenario: This vinaya rule is offensive and misogynistic, well, let’s drop it (well, just let’s get rid of the whole Word Commentary, not even knowing if it is from the Buddha or Upāli).

Boom. What an excellent quote! Thanks for sharing. I’m confused though, what is this? It says Dhammapada, but last I checked, there are no such stories, nor this type of dialogue, in the Dhammapada (though, it’s been 15 years or so since I read it). Is this from the commentary on Dhp?

The Story of Atula the Lay-disciple

While residing at the Jetavana monastery, the Buddha uttered Verses (227) to (230) of this book, with reference to Atula and his companions.

Once, Atula and his companions numbering five hundred, wishing to listen to words of dhamma, went to Thera Revata. The thera however was very aloof like a lion; he did not say anything to them. They were very much dissatisfied and so they went to Thera Sariputta. When Thera Sariputta learned why they had come, he expounded exhaustively on the Abhidhamma. He also was not to their liking, and they grumbled that Thera Sariputta had been too lengthy and too profound. Next, Atula and his party approached Thera Ananda. Thera Ananda expounded to them the bare essentials of the Dhamma. This time, they remarked that Thera Ananda had been too brief and too sketchy. Finally they came to the Buddha and said to him, “Venerable Sir, we have come to listen to your teaching. We have been to other teachers before we come here, but we are not satisfied with any of them. Thera Revata did not bother to teach us and he just kept silent; Thera Sariputta was too exhaustive and the Dhamma he taught us was too difficult for us. As for Thera Ananda, he was too brief and too sketchy. We do not like any of their discourses.”

To them the Buddha said, “My disciples, blaming others is not something new. There is no one in this world who is never blamed; people would blame even a king, or even a Buddha. To be blamed or to be praised by a fool is of no consequence; one is truly blamed only when he is blamed by a wise man, and truly praised only when praised by a wise man.”

Then the Buddha spoke in verse as follows:

Verse 228: There never has been, there never will be, nor is there now, anyone who is always blamed or always praised.

Verses 229 - 230: If the wise praise him day after day, knowing him to be truly faultless, wise and endowed with knowledge and virtue, who would blame him, who is like a nikkha of pure gold? The devas praise him; he is praised even by the great Brahmas.

At the end of the discourse Atula and his companions attained Sotapatti Fruition. 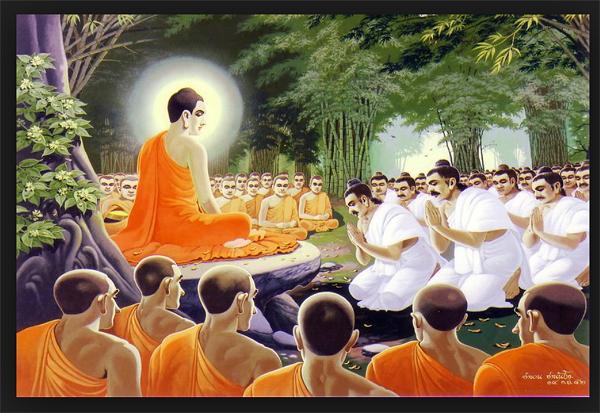